A Magnificent “Misconception” of Málaga City 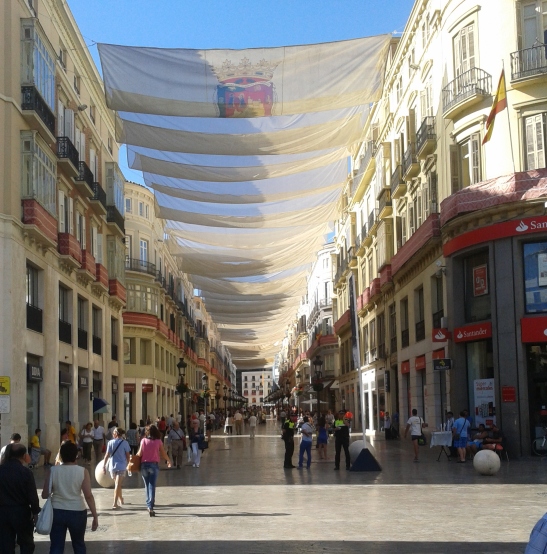 I have just read the following on a well-known travel forum:

“I’m thinking of visiting Malaga in a couple of weeks because it’s warmer than Ireland & appears to have lots to see (museums etc). Unfortunately I’m a little unsure because its nickname is “costa del crime” (not because of crime in the city but of those who’ve moved there from Ireland). So what I’m wondering is,
1) Has the city a large supply of Irish/English pubs, restaurants?
2) Does it cater for tourists more than Spanish people?
3) Are there enough landmarks/markets/museums to keep me busy if I stay one week?
4) Is the city centre a pretty area or should I stick to the beach front hotels?
5) Is it a friendly place where I can improve my Spanish?”.

It is the sort of forum post that continually makes my blood boil as this person’s idea of Málaga is what the city has been trying to shake off as its commonly perceived image for many years. This image could NOT be further from the truth!!!! Málaga is NOT the Costa del Sol/Crime (the Malagueños leave that auspicious “tag” for further along the coast to Marbella and its surrounding resorts – their town councils, inhabitants, tourist boards etc are equally as free to contest that “tag”).

The success of Malaga in re-branding itself has in fact been more “magnificent” than the original poster’s misconception. So much so that some resorts, places, estate agents or “relocation experts” as they now call themselves; time share complexes, etc. now all use the name “Málaga” whenever possible – something that was unheard of 10 years ago when “Costa del Sol” was the term to use. We continually get visitors (especially non-Europeans) booking our Gourmet Tapas Tours who tell us they are staying in Málaga, only for them to discover (when we ask if we can meet them at their city hotel) that they are in a time share resort up to an hour away from the city. Naturally they are disappointed (the resorts have given their address as Málaga – not strictly untrue as Málaga city bears the same name as the province, but is a shame that they do not distinguish between the two to their unsuspecting clients).

Malaga is now officially the “in” place on the Costa and quite rightly so!

In answer to the original post:
1) Only two Irish bars that I know – normally full of Spaniards (many of whom will be language students hankering after a glass of Guinness). The city reportedly has a bar for every 66 inhabitants so you should find a few that you will like, especially in the historical centre where bars, cafés and restaurants can be found on every street.
2) The city caters wonderfully for both tourists and its 600,00 Spanish inhabitants alike.
3) 26 Museums and Galleries including the magnificent Picasso Museum and Carmen Thyssen Museums plus some wonderful landmarks such as the Cathedral, Roman Amphitheatre, Alcazaba etc. should keep you occupied for a few days! Great central food market too and artisanal markets in the newly reformed port area and Soho area. Remember too that it celebrates Carnival, Holy Week and the August Feria with a considerable amount of panache!
4) The city centre is stunningly pretty – pedestrianized too which makes it a visitor’s delight for wandering around. No car fumes so environmentally a bonus! The city has three beaches – there are hardly any “beach front” hotels (and a minimal number of high-rise ones too compared to resorts further along the coast. Visitors tend to want hotels in the beautiful city centre (and the beach is just a short walk away).
5) Very friendly (and safe too, another bonus!). Locals love you for attempting a few words of their language and there are some excellent language schools (especially around the Plaza de la Merced area).

If you have been to Malaga and think the original forum poster could not be further from the truth then we look forward to your comments!

18 comments on “A Magnificent “Misconception” of Málaga City”

This entry was posted on January 13, 2014 by Tapas in Malaga in Málaga, Uncategorized and tagged Andalucia, Calle Larios, Is Malaga worth a visit, Malaga Shore Excursions, Málaga, Málaga Museums, Misconceptions of Malaga, Monumental Malaga, Spain.